“Hark! Peace!” It was the owl that shriek’d, the fatal bellman.

Game of Thrones meets Root RPG, mashed up into a one-page game. In the year 6XX AD, all truces are broken. Now every land holds a different banner. The ravens fight to keep traditions. The foxes stave off creatures from the west. The wolves march hungrily to expand their domain.

But our kingdom was by far the worst. The greediest. Now the king is dead. May he reign in hell. This city is free. We must never let it fall.

THRONE RATS is a one-page RPG created for the game(s) jam. Meet a dark medieval world of intrigue and war. Drop your friends in the middle of the action!

Play as anthropomorphic animals as they survive gritty and violent lands. Take the throne or fight off usurpers. It's past time for us all to pick a side.

Maze Rats by Questing Beast Games inspired the system and design principles. This work is my take on the world of Root RPG, with Game of Thrones, Mouse Guard, and other stuff thrown in. It was built in conjunction with First Fantasy, which uses the same system.

Follow the directions to make your character in minutes!

System and principles inspired by maze rats by questing beast and big bone by numbered works.

This work is not affiliated with game of thrones or hbo.

Throne Rats is a a grim medieval woodland animal fantasy trpg. And instead of steering in a more Redwall-y we're-all-in-this-together direction, it opts for Song Of Ice And Fire's complex web of political relationships and reasons for backstabbery.

The result is a tight, intricate rpg engine rendered in one page of dense but clean and readable text.

Mechanically, it plays a bit like Into The Odd. You have four stats, you try to roll a d20 under them to pass checks, and you can take damage on failures. Everyone has 5 Health, losing 1 from most injuries and dying at 0, and this actually makes for a pretty solid wall between the average PC and death.

To give color to characters, everyone has a unique set of species and traits and titles and background NPCs. Leveraging these traits and NPCs can make tasks easier, and doing things your species naturally excels at allows you to roll with advantage.

Interacting with characters can give you Strings on them, a la Monsterhearts, and you can use Strings to sway or harm them. Because Strings are very powerful, it can be reasonable to farm Strings on someone you want to fight---but this can have the purely non-mechanical side effect of making you care about them and not want to kill them.

For GMs, there are a lot of tables that can be used to generate NPCs, inhabited locations, or conflicts. There's also a pretty clean sense of what the world and game are about, making for easy storytelling.

Overall, if you're looking for a mechanically lightweight politically intricate medieval talking animals game, I'd strongly encourage you to give this a look. It's a very specific blend of things, but it's made very well.

-Penguin is unique in that it has the Arctic genus, and this doesn't seem to correspond to anything in the side table.

-The death rules refer to HP, not Health

Wow, thanks a lot for the review. Penguin is meant to correspond to the Arctic Coat specialty. Thanks for noting that. And the HP is a typo I suppose. Thanks again. What a great read.

Thank you for writing the game! 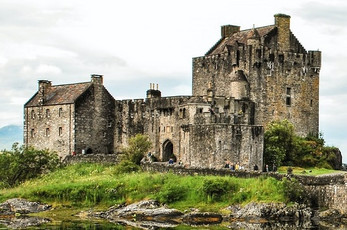 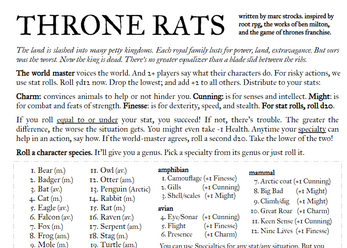 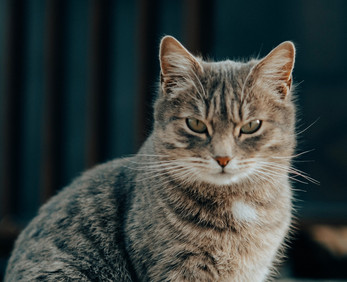